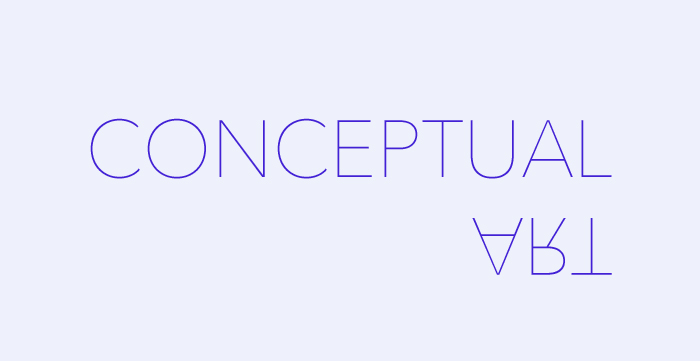 Although having first been defined in the 1960s and 1970s, the origins of conceptual art reach beyond these two decades. Dadaist Marcel Duchamp is widely seen as the movement’s pioneer, whose readymades, such as his famous Fountain of 1917, are cited as the first conceptual artworks. He exhibited found everyday objects as art, that defied all traditional notions of art. Neither had they been crafted by the artist, nor were they beautiful, or express anything personal about the artist. Duchamp converted everyday objects into art simply by choosing to call them art, whilst having the authority to do so as a renowned artist.

Like Duchamp before them, the conceptual artists of the 1960s abandoned beauty, rarity, and skill as measures of art. In 1967, Sol LeWitt wrote in his essay Paragraphs on Conceptual Art that “In conceptual art the idea or concept is the most important aspect of the work. When an artist uses a conceptual form of art, it means that all of the planning and decisions are made beforehand and the execution is a perfunctory affair.” Hence, conceptual art can be understood as a set of strategies, rather than a movement or a particular style. John Baldessari explained that “conceptual art wasn’t about art that had a concept, but about interrogating the concept of art.” Since the 1960s, conceptualism had a groundbreaking influence on all subsequent generations of artists and took on countless forms like painting, sculpture, printmaking, performances and happenings.